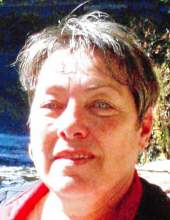 Memorial services will be held 1:30 P.M., Saturday, July 6, 2019 at Cataldo Funeral Chapel, 160 E. 4th St., in Garner with Rev. Scott Kozisek officiating. Visitation will be held one hour prior to services at the funeral chapel.

Memorials may be directed to MercyOne North Iowa Cancer Center in Mason City.

Wesla Rosanne Bodin, the daughter of Wesley and Dorothy (Ott) Robbins, was born January 14, 1950 at Buffalo Center. She attended school at Ventura where she graduated from high school in 1968. Rosie continued her education at Hamilton Business College in Mason City. She worked at Target in Mason City for a few years before moving to Brooklyn Center, MN where she met and married her husband, Burt Bodin. Rosie was employed at Burlington Northern Railroad for many years. After Burt passed away, she continued to live in the Twin Cities before moving to Garner in 2018 to be closer to family. She enjoyed craft work and traveling, especially trips to Asia and Peru.

Rosie is survived by her mother, Dorothy Short of Garner; a brother, Douglas (Sonnie) Robbins of Sioux City; two sisters, Sherri (Jim) Erkel of Central City, IA and Kandi (Ed) Kotz of Swaledale; seven nieces and nephews and their families.

She was preceded in death by her father, Wesley; husband, Burt; and stepfather, Bill Short.
To send flowers to the family in memory of Rosie Robbins Bodin, please visit our flower store.