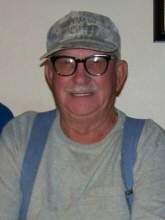 Roy F. Fender, 82, of Leland, Iowa died Thursday, July 31, 2014 at his home of natural causes. Funeral Services will be held at 10:00 A.M. Tuesday, August 5, 2014 at Petersen Lund Funeral Chapel, 505 North Clark St. Forest City, IA with Pastor Joyce Schmidt officiating. Visitation will be held 5:00 - 7:00 P.M on Monday at the funeral home. Interment will be held in the Onawa Cemetery in Onawa, Iowa at 1:00 P.M. Wednesday, August 6, 2014. In lieu of flowers, memorials may be directed to the Roy Fender memorial fund.
Roy Fender was born December 13, 1931 in Onawa, Iowa the son of Leslie and Henrietta (Nohrnberg) Fender. He attended schools in Onawa, graduating in 1951. He enlisted in the United States Air Force and after serving was honorably discharged.
Roy was married to Judith (McLaughlin) Fender from 1956-1963. When living in Blencoe, he worked at the Blencoe Co-op Elevator. Later, he worked for several construction companies. After moving to the Forest City area, he worked at Winnebago Industries delivering motor homes for several years. After retiring, he spent most of his time in the garden and working at the farmer's markets.
Roy enjoyed hunting and fishing and spending time outdoors. He enjoyed gardening and was well known for his great produce. While working for Winnebago, he enjoyed traveling around the country. He was a long time member of the Leland V.F.W. and the American Legion in Onawa, IA. He will be missed by all who knew and loved him.
He is survived by his children, Rory (Teri) Fender of Hampton, IA, Rob (Kathy) Fender of Clarion, IA, Rick (Penny) Fender of Ozark, MO, Tracy (Joe) Ritchie of Harrah, WA and Tami (Mark) Joslin of Maui, HI; eleven grandchildren; two step-grandchildren and numerous great-grandchildren; significant other, Stephanie Jacobsen of Leland; brothers, Bert (Shirley) Fender of Onawa, IA and Dale (Mary) Fender of Napa, CA. and many nieces and nephews.
Roy was preceded in death by his parents and brother, Lyle Fender.

To send flowers to the family in memory of Roy F. Fender, please visit our flower store.