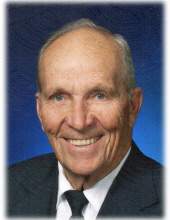 Memorial services will be held 10:30 A.M., Tuesday at the United Methodist Church in Garner with Rev. Paul Evans officiating. Inurnment will be at Concord Township Cemetery in Garner with military rites by the Garner Veterans Ceremonial Unit.

Royal Rynald Molander, the son of Fred and Clara Molander, was born February 3, 1923 on a farm near Wesley. He graduated from Garner High School and served his country from 1941 until 1947 in the U.S. Navy in the Pacific Theatre along with his brothers, Bud and Donald. After his honorable discharge, he met the love of his life, Clare Harbison, at a dance in Garner and they married shortly thereafter. Moe worked for the U.S. Postal Service in Garner and as a Post Master in Coon Rapids, Iowa until his retirement in 1975. Outside of the three years in Coon Rapids, he lived his entire life in the Garner area until moving to West Des Moines with his wife in July of 2014. During his retirement, he worked at various jobs to stay active, including running the Garner Golf and Country Club and delivering Winnebago motor homes. Many a story began with “one time when delivering a motor home”. Moe will always be remembered by family and friends for his friendliness, humor, respect for others, story-telling and, of course, for his love of golf. Of course, his favorite story included detailing his seven holes-in-one.

He was a member of the United Methodist Church in Garner and was active in the Garner Lions Club, Masonic Lodge, American Legion and VFW. Moe coached American Legion baseball and refereed high school baseball, basketball and football. He also served on the Garner-Hayfield Community School Board.

He was preceded in death by his parents; his wife of 67 years, Clare; an unnamed baby son; sister, Minetta Loebig; and brothers, Bud and Donald Molander.
To order memorial trees or send flowers to the family in memory of Royal R. Molander, please visit our flower store.