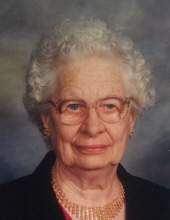 Funeral services will be held 11 A.M., Friday at Zion Evangelical and Reformed Church in Garner with Rev. Brian Lund officiating. Burial will be in Ell Township Cemetery in Klemme.

Memorials may be directed to the Hancock County Relay for Life.

Ruby Cora Blanchet, the daughter of Cornelius J. and Marie (Thiemann) Wille, was born December 22, 1916 on a farm near Klemme. She was second in line as her family grew to include three sisters and four brothers. Ruby attended country school at Ell Township No. 8 and graduated from Klemme High School in 1935. On March 3, 1943 she was married to Edmond Jacob Blanchet at Immanuel Reform United Church of Christ in Klemme. Following Ed’s honorable discharge from the service, they farmed in two locations near Garner and Klemme. In 1952, they moved to a farm south of Forest City. After Ed passed away in 1992, she moved to a home in Garner. Following her stroke, she recovered enough to move to Prairie View Apartments, where she lived for ten years. Her next move took her to the assisted living in Ruthven, where she easily transitioned to the nursing home in 2013.

Ruby was a member of Zion Evangelical and Reformed Church in Garner. Outside of helping on the farm, she did work for a short time at Stitchcraft in Forest City. Her skill as a farm hand and homemaker were priceless. She could prepare meals fit for a king and take care of the animals with the upmost skill. Ruby was a 4-H leader and helped her family exhibit Holstein cows and other animals on the state level. She left a legacy of many hand stitched quilts, a skill she developed as a young child.

She was preceded in death by her husband, Ed; her parents; sisters, Norma Rockow and Ada Rockow; an infant brother, Steward; brothers, Aaron and Ray Wille; and son-in-law, Dean Brugman.
To send flowers to the family in memory of Ruby C. Blanchet, please visit our flower store.