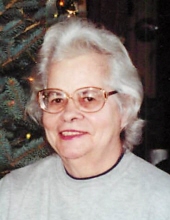 A gathering of family and friends will be 5:00 – 7:00 P.M. Wednesday, September 9, 2015 at the funeral chapel. Inurnment will be in the Center Evangelical Lutheran Cemetery in Leland.

The family requests that in lieu of flowers memorials may be directed to the Ruby Hanson memorial fund.

Ruby L. Hanson was born March 16, 1935 in Nebraska, the daughter of Loren and Dorothy (Swanson) Carlson. She was married to Henry Hanson on May 31, 1953 in Anchorage, AK, to this union five children were born. Ruby has been a long time Forest City resident and took pride in raising her five children and taking care of her home. She was a member of the Forest Evangelical Lutheran Church where she was active in many roles. She enjoyed camping, gardening, canning, crocheting, sewing, cooking and baking, reading books and going to rummage sales and watching parades. She loved spending time with her family and friends, she will be dearly missed by all who knew and loved her.

She was preceded in death by her parents, husband, Henry in 2014; son, Jerry Hanson in 2002; granddaughter, Theresa Suby; great-granddaughter, Bethany Hanson; brothers, Gene and Glenn Carlson and sister, Joann Feagers.
To order memorial trees or send flowers to the family in memory of Ruby L. Hanson, please visit our flower store.
Send a Sympathy Card