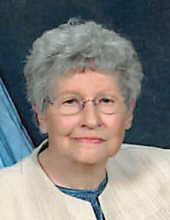 Memorial services will be held 11:00 a.m. on Saturday, November 19th at Faith Lutheran Church in Miller with Rose Visser, Lay Minister, officiating. Visitation will be held at the church one hour prior to services.

Ruby Mae Taylor, the daughter of Earl and Noy (Blankenship) Gates was born May 19, 1926 in Alden, IA. She attended various schools in Iowa, graduating from Hayfield High School. On July 30, 1944 she married Wayne Taylor, and together they raised their four children: Howard, Kathy, Pat and Cindy. They began farming on the Taylor farm near Garner, and then went on to farm near Ventura and Clear Lake. In 1966, they returned to the family farm, retiring from active farm life in 1992. In 2002, they moved into Garner where she resided until moving to Cardinal Grove in August, 2015.

She was a member of Faith Lutheran Church and WELCA. Throughout the years, Ruby enjoyed baking and cooking for her family, flower gardening and crocheting as well as assisting her husband, Wayne, in finishing the wood products that he made. She participated in various community organizations and activities.

She was preceded in death by her husband, Wayne in 2006; son-in-law, Paul Sperrazza in 2009; brothers, Harold, Dale and Raymond Gates; sisters and brothers-in-law, Evelyn (Jesse) Busick, Faye (Harold) Kahlstorf and Lois (Chuck) Dayton; and in-laws, Marjorie (Richard) Hopper and Eugene Bertelsen.
To order memorial trees or send flowers to the family in memory of Ruby M. Taylor, please visit our flower store.
Send a Sympathy Card