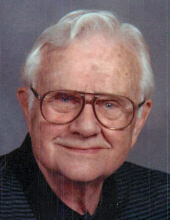 Funeral services will be held 2:00 P.M., Wednesday, July 22nd at Zion Evangelical and Reformed Church in Garner with Rev. Brian Lund officiating. Burial will be in Concord Township Cemetery with military rites by the Garner Veterans Ceremonial Unit.

Russel Dean Stille, the son of Earl Carl and Dena Lula (Greiman) Stille, was born March 13, 1924 in Garner. Russ attended Drake University, Des Moines, IA prior to serving in the U.S. Naval Air Corp during WWII. He then returned to and graduated from Drake in 1947. Russ had a varied career, and dedicated his time for many volunteer positons after retirement. He drove patients many miles to and from medical appointments. He once even won the Volunteer of the Year for the state of Wisconsin. He remained very active in church and community activities, including the Lions Club and County Commissioner for Burnett County, WI. He enjoyed the majority of his life in Minnesota on Lake Minnetonka. Later in life he and Emily returned to Maple Grove, MN to be near family.

He was preceded in death by his parents; brothers, Clinton Earl (Jean) Stille and Arvil Leroy Stille.
To order memorial trees or send flowers to the family in memory of Russel D. Stille, please visit our flower store.
Send a Sympathy Card