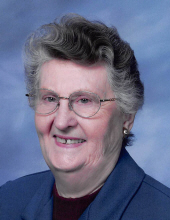 Funeral services will be held 10:30 A.M., Monday, April 3rd at the United Methodist Church in Garner with Rev. Paul Evans officiating. Burial will be at Concord Township Cemetery.

Visitation will be held from 3 to 5 P.M., Sunday at the Cataldo Funeral Chapel, 160 E. 4th St., in Garner and will resume one hour prior to services at the church.

Ruth Louisa Gast, the daughter of F. Ben and Hattie (Gates) Ridder, was born in 1922 on a farm west of Klemme. She attended Liberty No. 8 country school and graduated from Klemme High School. Ruth continued her education at Morningside College in Sioux City. She also took a correspondence art course and did paintings and calligraphy for herself and Liberty Methodist Church. She was united in marriage to Loren Gast on January 1, 1943, the first wedding held at the Liberty Methodist Church west of Klemme. The couple moved to San Antonio, TX while Loren served his country in the U.S. Army Air Force. During this time, Ruth was a waitress at Joske’s Restaurant and then was hired at Merrill Lynch Investments. Following Loren’s honorable discharge, they returned to Iowa and settled on the Gast family farm west of Klemme where they raised their family. Ruth was very active on the farm raising chickens, growing a large garden, designing and sewing clothes for herself and family. She also sold World Book Encyclopedias to pay for a remodeled kitchen. When her daughter was growing up, Ruth was a 4-H leader for the South Liberty Busy Bees 4-H club. After retiring from farming, Ruth and Loren moved into Garner in 1979.

She was preceded in death by her parents; husband, Loren; son-in-law, Hal Hefti; and a brother, Elwyn Ridder.
To order memorial trees or send flowers to the family in memory of Ruth L. Gast, please visit our flower store.
Send a Sympathy Card