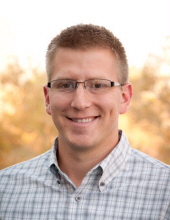 A memorial service will be held 10:30 A.M., Friday, September 18th at Zion Evangelical and Reformed Church in Garner with Pastor Todd Doxzon officiating. Following the service a luncheon will be served at the Garner Evangelical Free New Life Ministry Center.

A memorial visitation will be held from 5 to 8 P.M., Thursday, September 17th at Zion Evangelical and Reformed Church. Visitation will continue one hour prior to services at the church.

In lieu of flowers, memorials may be directed to the Ryan Hrubes Memorial Fund. Cataldo Funeral Home is in charge of arrangements.

Ryan Paul Hrubes, the son of Dennis Hrubes and Barbara (Buckley) Hrubes, was born January 3, 1987 in Mason City. Ryan attended West Hancock Schools until the 7th grade and graduated from Garner-Hayfield High School in 2005. He continued his education at Iowa State University in Ames where he earned a Bachelor of Science degree in Agriculture Business in 2010. Following graduation, he was employed by Dow AgroSciences in Pasco, Washington for three years before moving to Omaha, Nebraska in 2013. On September 27, 2014 Ryan was united in marriage to Emily Chappie at Crater Lake, Oregon. They lived in Omaha where Ryan continued his employment with Dow AgroSciences as a sales representative.

Ryan loved the Lord with all his heart, and everything he did was a result of that. He showed the love of Christ practically by making meals for people, helping others with home construction projects or setting up for church. In his desire to honor Christ in his marriage and be a godly husband, he led and loved Emily well. He had a charismatic personality, connected easily with people, and loved his family and friends deeply. He enjoyed building things, traveling, agriculture, and of course, all things Iowa State.

Ryan was an active member of Calvary Omaha Church. He served as a volunteer for the Hope Center playing basketball and leading Bible studies for underprivileged inner city kids. He served on the leadership team for Hope Filled Marriage. Ryan was treasurer for Young Professionals in Agriculture, Nebraska and Southeast Iowa Chapter. During his time in college Ryan was a member of the Ag Business Club, NAMA, Student Chapter VEISHEA, Young Professionals, Ag Future of America and AFA Alliance. While in college, Ryan completed six internships, including an internship in Brazil. He also studied abroad in Australia, Germany and Malaysia.

He was preceded in death by his paternal grandfather, Joseph Hrubes.
To order memorial trees or send flowers to the family in memory of Ryan Paul Hrubes, please visit our flower store.
Send a Sympathy Card