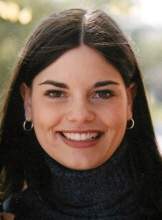 Memorial services will be held 2:00 P.M., Monday, December 23rd at the Immanuel Lutheran Church in Forest City with Pastor Rod Hopp officiating. Inurnment will be at a later date in Goshen, Indiana.

Visitation will be one hour prior to services at the church. Petersen Lund Funeral Home is in charge of arrangements.

In lieu of flowers, memorials may be directed to Immanuel Lutheran Church in Forest City.

Sally Anne Steffensen, the daughter of DeRay and Karen (Eymann) Steffensen, was born October 10, 1983 at Mason City. She was baptized at Immanuel Lutheran Church in Forest City and confirmed at Trinity Lutheran Church in Goshen. Sally attended school in Forest City until 1991 when the family moved to Goshen, Indiana. In 2002 she graduated in the top 10 in her class from Goshen High School. She continued her education at Purdue University in West Lafayette, Indiana, where she was on the Dean's list and a member of Alpha Chi Omega Sorority. After college Sally returned to Goshen and was active in volunteer work in the community and her church.

She was a member of Trinity Lutheran Church in Goshen.

She was preceded in death by her grandfathers, John Eymann and DeVere Steffensen; and an aunt, Nancy Monson.

To send flowers to the family in memory of Sally Anne Steffensen, please visit our flower store.