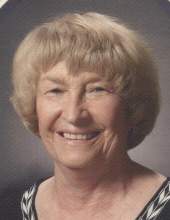 Funeral services will be held 2 P.M., Saturday, December 16, 2017 at St. Boniface Catholic Church in Garner with Fr. Jim Dubert officiating. Burial will be in the church cemetery.

Visitation will be held from 4 to 7 P.M., Friday at St. Boniface Catholic Church in Garner with a Scriptural wake service at 3 P.M. followed by a rosary. Visitation will resume one hour prior to services at the church on Saturday. Arrangements are with Cataldo Funeral Home of Garner.

Memorials may be directed to Hospice of North Iowa.
Sandra Jean Young, the daughter of Truman and Alma (Helgeson) Thompson, was born February 19, 1938 at the Forest City Hospital in Winnebago County. She was baptized at Winnebago Lutheran Church near Lake Mills and confirmed at Fertile Lutheran Church. Sandy graduated from Fertile High School in 1956. After high school, she worked for the telephone company in Mason City. She attended Airline School in Omaha, NE and from there she worked at the Federal Reserve Bank in Minneapolis, MN. She then returned to Iowa and was employed at the Clear Lake Bakery. On February 23, 1964, she was married to Richard “Dick” Young at St. Boniface Catholic Church in Garner. To this union two sons were born, Craig Allen and Alan Paul. They made their home in Garner all of their married life. She enjoyed bowling, golf, bridge, shopping, reading, her four grandchildren, family and friends.

She was preceded in death by her parents; and sister, Norma Thompson.
To send flowers to the family in memory of Sandra J. Young, please visit our flower store.