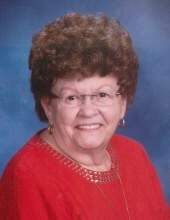 Funeral services will be held at 11:00 A.M. on Friday, October 16, 2015 at Immanuel Lutheran Church in Forest City, with Pastor Rod Hopp officiating.

Visitation will be from 4 to 7 PM on Thursday, October 15, 2015 at Cataldo Schott Funeral Chapel, 505 North Clark Street in Forest City.

Burial will be in Madison Township Cemetery in Forest City.

Memorials may be sent to the Immanuel Lutheran Church.

Sandra Rae McEnelly was born in Hanlontown, Iowa on December 15, 1941, the daughter of Norman D. and Marion D. (Lewis) McEnelly. She received her education in Mason City and Forest City schools. She also attended NIACC and became a Licensed Practical Nurse.
She married Earl Skjeie in 1959 and to this union, three children were born, a son, Terry Skjeie and daughters, Mari Jo Mitchell and Kari Sue Johnson. She later divorced Earl and in 1980 she moved to Texas and worked in various nursing fields for many years. In 1987 she married Don Meade of Dayton, Texas where they made their home until 1998 when they returned to Forest City, this union eventually ended in divorce.

She was a member of the Immanuel Lutheran Church and a member of the 12-step Support Group for 35 years. This support group meant everything to her. Sandy loved to make quilts and do hand-quilting and donated many to charity. She loved to be with her children and grandchildren. She also loved to play cards, especially Bridge. She will be dearly missed by all who knew and loved her.

She was preceded in death by her parents.
To order memorial trees or send flowers to the family in memory of Sandra R. Meade, please visit our flower store.