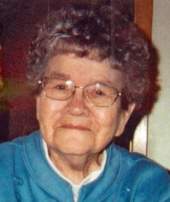 Private family services will be held Monday, May 5, 2014 at the Petersen Lund Chapel in Forest City.

Memorials may be directed to Hospice of North Iowa - Mason City in Sally Peterson's name.

Selma "Sally" Elizabeth Peterson, the daughter of Theodore and Frieda (Omundson) Haugland, was born February 14, 1924 on a farm near Vinje. She attended school in Crystal Lake and then worked with her parents on their farm. They lived in various places in the Forest City area. On February 14, 1944 she was married to Harold Marcellus Peterson in Forest City. The couple lived in Winnebago and Hancock County over the years. During Harold's time in the US Army they lived in Templeton, TX. Sally worked at Nebraska Food Plant in Britt, and at Winnebago Industries in Forest City retiring at age 62. Sally enjoyed gardening, baking, cooking, rummage sales and camping.

She was a member of Immanuel Lutheran Church in Forest City.