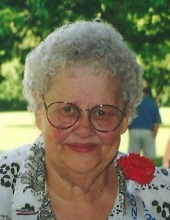 A gathering of family and friends will be one hour prior to the services at the funeral home on Saturday.

Private family inurnment of cremains will be held in East Lawn Cemetery in Algona, Iowa

The family requests that in lieu of flowers, memorials may be directed to the Sharon Ann Richards memorial fund in care of the family.

Sharon Ann Richards was born April 12, 1932 in Algona, Iowa the daughter of Ernest and Bertha (Shepherd) Godfredson. She attended Algona Schools, graduating in 1951. She was married to Kenneth Richards on January 22, 1953, to this union three children, Bill, Ed and Lori were born.

In her free time, Sharon enjoyed knitting, watching the Chicago Cubs, playing Bingo and spending time with her family and friends. Sharon also enjoyed being a part of the Birthday Club.

Sharon was preceded in death by her parents; husband, Kenneth Richards in 1982; son, Bill Richards in 1976 and her brother, Dick Godfredson.
To order memorial trees or send flowers to the family in memory of Sharon Ann Richards, please visit our flower store.
Send a Sympathy Card