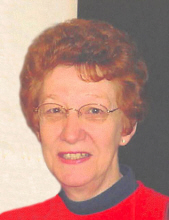 Visitation will be held from 4 to 8 P.M., Friday at the Cataldo Funeral Chapel, 310 Main St., in Woden and will resume one hour prior to services at the church.

Sharon Lee Buffington, the daughter of Henry B. and Christena (Dirksen) Isebrand, was born May 19, 1943 in Forest City. She attended country school south of Forest City and graduated from Woden Crystal Lake High School in 1961. On September 2, 1961 she was married to Beryl Buffington at the United Methodist Church in Crystal Lake. They lived in Woden, Garner and Britt until 2007 when they returned back home to Woden. Sharon had worked at Winnebago Industries, Woden Locker and Shar’s Shoppe in Woden. She also co-owned and operated Britt Lumber Company with Beryl from 1997 until their retirement in 2007. Family was very important to Sharon. She loved spending time with her grandchildren and great grandchildren. She also enjoyed bus trips with Beryl and gardening.

She was an active lifetime member of First Presbyterian Church.

She was preceded in death by her parents; sister, Wilma Isebrand; and brother, Don (LaVonne) Isebrand.
To order memorial trees or send flowers to the family in memory of Sharon L. Buffington, please visit our flower store.
Send a Sympathy Card