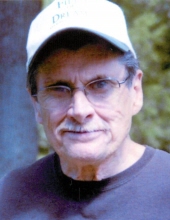 Memorials may be directed to the Sheldon Spores memorial fund in care of the family.

Sheldon James Spores was born December 27, 1944 in Dorchester, Iowa the son of James W. and Luain (Burroughs) Spores. He attended and graduated from Waukon High School. He was married to Kathryn Kenyon on July 16, 1965 in Canton, MN, to this union, three children were born. He worked for John Deere in the paint line from 1974-1984 until moving to Forest City where he was employed by Winnebago Industries from 1985 until his retirement on July 1, 2011.

He was a former member of Christ Lutheran Church in Waterloo, Iowa. Sheldon enjoyed fishing, hunting, golfing, bowling and traveling with his wife. He enjoyed the time he spent with his family and will be dearly missed by all who knew and loved him.

He was preceded in death by his parents, James and Luain Spores; son-in-law, George Nielsen; brother-in-law, William Lunde; niece, Rachel Heber and great-granddaughter, Georgia Taylor.
To order memorial trees or send flowers to the family in memory of Sheldon James Spores, please visit our flower store.
Send a Sympathy Card