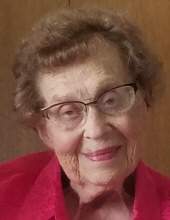 Shirley Arlene Schutter, age 88 of Forest City, died Monday, September 17, 2018 in Leland as a result of a motor vehicle accident.

Burial will be at West Prairie Lutheran Cemetery.

In lieu of flowers, memorials may be directed to the West Prairie Cemetery fund.

After high school she attended Iowa Teachers College, what is now University of Northern Iowa, graduating in 1949. She taught school in Britt, later in Fort Dodge and then substitute taught around the Thompson – Forest City area.

On June 19, 1955 she married Vernon Schutter at Winnebago Lutheran Church. The couple farmed near Buffalo Center for three years then bought a farm near Leland where they lived for 40 years.

With the arrival of Beth and Bill, Shirley became involved with 4-H as a leader, teaching Sunday School and attending the kid’s activities. Family was always very important to her and she enjoyed the times she spent with them.

The couple enjoyed traveling and visited Alaska, New York City, Mexico, Washington, D.C. and San Antonio, Texas. Shirley and daughter Beth also enjoyed a trip to Europe. In 1997 they turned the family farm over to their son Bill and his family and moved to Forest City.
On New Year’s Eve 2001 Shirley suffered a severe stroke but she didn’t let that slow her down. She continued to be active in her church, belonging to several study, card and birthday clubs. Shirley was an avid reader and enjoyed watching the Minnesota Twins baseball games. She kept up on current events and was still interested in the family farm operation.

She was preceded in death by her parents, husband Vernon, brother Gerald Gustafson, brother/sister-in-law’s Evelyn and Ralph Taylor, Harry and Marcella Schutter, nephews Jon and Jeff Gustafson.
To send flowers to the family in memory of Shirley A. Schutter, please visit our flower store.