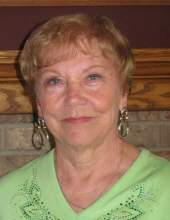 Shirley A. Smidt, 87, of Britt passed away Saturday, January 8, 2022 at Hancock County Memorial Hospital in Britt.

Funeral services will be held 10:30 a.m., Thursday, January 13, 2022 at the United Methodist Church in Britt with Rev. Robert Dodge officiating. The service will be livestreamed on the Cataldo Funeral Home Facebook page. Burial will be at Evergreen Cemetery.

Visitation will be held from 4:00 to 6:00 p.m., Wednesday at Cataldo Funeral Home, 178 First Ave. S.W., Britt and will resume one hour prior to services at the church.

Memorials may be directed to Britt United Methodist Church or the West Hancock Ambulance Service.

Shirley Anita Smidt, the daughter of Otto and Charlotte (Dunlap) Cook, was born on December 17, 1934 in Belmond, Iowa. Shirley grew up and attended school in Mason City until her father Otto passed. The family moved to Britt where she graduated from Britt High School in 1952. On November 21, 1952 she was married to Lawrence V. Smidt at Wesley Methodist Church in Mason City. Shirley and Lawrence lived in Britt all their married life, where they raised their four children. Over the years, Shirley worked in several local businesses including the Britt Hospital, Britt Tech Corp. and the Vi-Mil Boutique. She was an active member of the community, a founding member and volunteer with WHAS, Britt Lioness Club, Red Hat Society and a served as a member of the Britt City Council. She was also an avid sports fan and enjoyed watching sporting events with family members and was a member of bowling leagues in Britt over the years. It was rare to find Shirley without a book or crossword nearby, she loved reading and testing her knowledge. Shirley was a caregiver of several elderly friends and relatives over the years. She also greatly enjoyed hosting her children and grandchildren on Saturday mornings where she always had a wonderful breakfast meal prepared.

She was an active member of the Britt Methodist Church.

She was preceded in death by her husband, Lawrence; parents; stepfather, Marvin Nelson; sister, Karen Hughes; and brothers and sisters-in-law, Eugene Smidt, Leona (Jack) Smith and Dorothy (Jim) Guida.
To send flowers to the family in memory of Shirley A. Smidt, please visit our flower store.