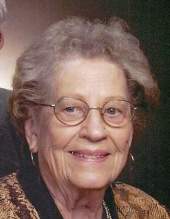 Visitation will be held from 5 to 7 P.M., Friday at the Cataldo Funeral Chapel, 160 E. 4th St., in Garner with a VFW Auxiliary service at 5 P.M. Visitation will continue one hour prior to services at the church.

Shirley Maxine Haes, the daughter of Henry and Mattie (Olson) Dakken, was born November 21, 1921 in Lake Mills. She was baptized and confirmed at Salem Lutheran Church. Shirley graduated from Lake Mills High School in 1940. On February 7, 1942, she was united in marriage to Gordon Haes at the Lutheran parsonage in Chillicothe, Missouri. The couple moved to Garner where they raised their family. Besides being a homemaker she also worked at Nesbit's Cafe, Garner Sale Barn, Marietta Quarry and managed the Garner VFW for thirty-five years. She enjoyed dancing, fishing with her husband, frog hunting and picnics with family and friends.

She was a member of St. Paul Lutheran Church, LWML and belonged to a knitting club. Shirley also was a charter member of the Garner VFW Auxiliary.

Shirley is survived by her children, Marlin "Mick" (Kathy) Haes of Minneapolis, MN, Margo Greiman of Windsor, CO, Marsha (Marion) Johnson of Garner and Mareen Nedved of Garner; 18 grandchildren; 37 great grandchildren; one great-great grandson; and many nieces and nephews. Shirley was also a god mother to the Ruppert children in Garner.

To send flowers to the family in memory of Shirley Haes, please visit our flower store.