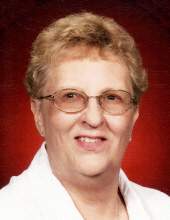 Funeral services will be held 10:30 A.M., Friday, May 25th at the United Methodist Church in Garner with Rev. Paul Evans officiating. Burial will be at Rock Falls Cemetery.

Visitation will be held from 5 to 7 P.M., Thursday at the Cataldo Funeral Chapel, 160 E. 4th St., in Garner and will resume one hour prior to services at the church.

Shirley Jean Muth, the daughter of Raymond and Alice (Kahler) Gruben, was born April 17, 1936 in Portland Township, Cerro Gordo County. She attended country school near her home and graduated from Nora Springs High School. Following high school, Shirley worked at Northwestern Bell Telephone Company in Mason City. On July 2, 1955 she was married to Alfred Burke at Holy Family Catholic Church in Mason City. The couple lived in Rock Falls where they raised their daughter, Cindy. Shirley was employed in the dietary department at Mercy Medical Center in Mason City for almost 40 years. After Alfred passed away in 1990, she continued to live in Rock Falls. On February 20, 1993 she was married to Ralph Muth at Old Stone Methodist Church in Rock Falls. They made their home in Garner. She enjoyed spending time with her grandchildren, cooking, shopping, and gardening.

She was a member of the Garner United Methodist Church, UMW – Esther Circle and the Hancock Ag Girls.

She was preceded in death by her parents; first husband, Alfred in 1990; and second husband, Ralph in 2012.
To order memorial trees or send flowers to the family in memory of Shirley J. Muth, please visit our flower store.