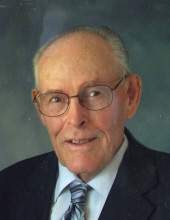 Funeral services will be held 1:00 P.M., Wednesday, July 22, 2015 at Peace Reformed Church south of Garner with Rev. Mark Larson officiating. Burial will be in the church cemetery.

Memorials may be directed to Peace Reformed Church.

Stanley Alan Peter was born August 23, 1921 near Redfield, South Dakota. He was the son of Charles Leonard and Mable Marie (Hansen) Peter. He received his early education in Spink County, South Dakota. In 1934, the family moved to a farm near Swaledale, Iowa. Stanley graduated from Swaledale High School in 1941 and farmed with his father and his brother, Marvin. On September 10, 1955, he married Miriam Elizabeth Hueneman at Peace Reformed Church. The couple initially made their home in Swaledale. They had two children, Rebecca Elizabeth and Douglas Alan. In 1962, they moved to the family farm near Garner. Stanley was actively engaged in farming for over half a century. During this time, he was also the church custodian.

Stanley served as an elder, deacon and Sunday school teacher at Peace Reformed Church. He was also a 4-H Club Leader.

Stanley is survived by his children: daughter, Rebecca E. Peter of Garner, son, Douglas A. Peter of Clive, and his wife, Kimberly, and grandson, Grant Michael Peter of West Des Moines; two sisters, Melicent Ames of Swaledale and Elaine Taylor of Clear Lake. Survivors also include brothers-and sisters-in-law, Robert and Abigail Jacobsen of Dows, Don and Eunice Larson of Livermore; and many nieces and nephews.

He was preceded in death by his wife, Miriam in 2012; parents; brother, Marvin Peter; brothers-in-law, M.W. Ames and Howard Taylor; and sisters-in-law, Lois Howell and Rachel Schumpp.
To order memorial trees or send flowers to the family in memory of Stanley Peter, please visit our flower store.