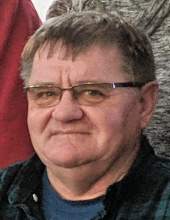 Visitation will be held from 3 to 6 P.M., Sunday at St. Boniface Catholic Church with a Scriptural Wake service at 2:30 P.M. followed by a rosary service.

Memorials may be directed to the Steven Buckley Memorial Fund in care of the family. Just as he had in life, Steve wanted to help others in death by being an organ donor.

Steven Elmer Buckley, the son of Elmer and Marion (Brozik) Buckley, was born August 23, 1956 in Belmond. He graduated from Klemme High School in 1975 and continued his education at Iowa State University in Ames. After college, he returned to the family farm west of Klemme to help with the livestock and grain operation. Steve enjoyed playing catch with his dog Justin, his nephews and nieces, dancing, was an avid reader and also enjoyed researching farm practices on the internet.

He was a member of St. Boniface Catholic Church, was a past Liberty Township Trustee and former board member of the Garner Farmer’s Co-op Society.

He was preceded in death by his nephew, Ryan Hrubes; aunt and uncles, Jim and Ella Marie Ridder, Leonard Buckley, Maurice Buckley and Tony McLaughlin.
To send flowers to the family in memory of Steve E. Buckley, please visit our flower store.