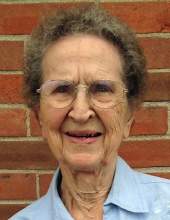 Tessie Della Blank Johnson, the daughter of Thomas and Esther (Malek) Blank, was born November 15, 1921, on her maternal grandparent’s farm in Minnesota. She graduated from Hayfield High School in 1939. On April 5, 1942, she married Marvin Gaylord Johnson at Newport, Rhode Island. Tessie was a member of Garner United Methodist Church. She was an active member in the Hayfield Methodist Church including Sunday School teacher, Altar Guild and singing. She participated in the Hayfield You Go I Go Club as well as the Garfield Madison Club. She was the business manager for their family business, Johnson Construction and later worked for a CPA in Forest City and at Winnebago Industries. Tessie was an avid reader and enjoyed knitting, quilting, gardening, baking and family.

She was preceded in death by her husband, Marvin, April 28, 2012; her parents; three brothers, Lehman, Jack and Curtis; two sisters, Eunice and Marcia; daughter-in-law, Lori Johnson; and sister-in-law, Emma Blank.
To send flowers to the family in memory of Tessie D. Johnson, please visit our flower store.