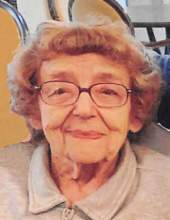 Visitation will be held from 4:00 to 6:00 P.M., Tuesday at Cataldo Funeral Chapel, 160 E. 4th St. in Garner. Masks are encouraged and social distancing will be observed.

Memorials may be directed to St. John’s Lutheran Church or MercyOne Hospice of North Iowa.

Thelma Viola Bohn, the daughter of Edward and Anna (Woiwod) Bohn, was born September 17, 1931 on a farm north of Ventura. She was baptized and confirmed at St. John’s Lutheran Church near Garner. Thelma graduated from Ventura High School and continued her education at a business school in Mason City. She lived her adult life in Garner where she was employed as a secretary at Garner-Hayfield High School and later the Hancock County REC until her retirement. She enjoyed gardening, quilting and traveling with her sister, Hilda.

She was a lifetime member of St. John’s Lutheran Church and belonged to a gardening and quilting club.

She was preceded in death by her parents; two sisters, Mildred and Hilda Bohn; and brother, Milton (Darlene) Bohn.
To order memorial trees or send flowers to the family in memory of Thelma V. Bohn, please visit our flower store.