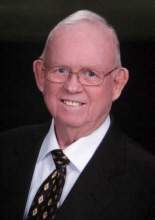 Memorial Services will be held 10:30 A.M. Friday, March 14, 2014 at Immanuel Lutheran Church in Forest City with Rev. Rod Hopp officiating.
A gathering of family and friends will be held from 5-7 P.M. Thursday (March 13, 2014) at Petersen Lund Funeral Home, 505 North Clark St. and will continue one hour prior to services at the church on Friday. Inurnment will be held in Oakland Cemetery at a later date.

Ted Lewison was born December 25, 1927 to L. T. and Irene (Duea) Lewison in Story City. He served in the United States Marine Corps from August 27, 1946 until December 5, 1952 when he was honorably discharged. He furthered his education at Waldorf College graduating with a Liberal Arts Degree in 1952. He was united in marriage to Alice Bartleson on September 4, 1951 at Immanuel Lutheran Church, Forest City. Ted worked for Hanson Furniture and Funeral Home for many years. He retired from Winnebago in the Stitchcraft division after 21 years. Ted enjoyed wood carving, fishing, their cabin in Minnesota, and cooking. Above all else, Ted enjoyed spending time with his family. He was a member of Immanuel Lutheran Church, serving as an usher and on the church council. He also served as a Boy Scout leader. Ted was a wonderful caregiver for his in-laws and brother-in-law, Rich, for many years. Ted will be dearly missed by all who knew and loved him.

He was preceded in death by his parents L.T. and Irene (Duea) Lewison, son, Jay, in 1981, father- and mother-in-law, George and Myrtle Bartleson and brother in-law, Richard Bartleson.

To order memorial trees or send flowers to the family in memory of Theodore Lewison, please visit our flower store.