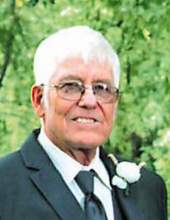 Thomas L. Larson, 78, of rural Forest City passed away Sunday, August 1, 2021 at his home after a 14-month battle with pancreatic cancer.

Thomas LuVerne Larson, the son of LuVerne and Myrtle (Thompson) Larson, was born March 22, 1943.  He was baptized and confirmed at the United Methodist Church in Crystal Lake.  Thomas lived 2 ½ miles west of Crystal Lake growing up and graduated from Crystal Lake High School in 1961.  He continued his education at Waldorf College.  During high school he was active in sports.  On September 14, 1962 he married Karen Logemann at the Little Brown Church in Nashua.  These crazy kids were married for 58 years.  To this union four children were born, Lori Lynn (special needs), Michael, Erik and Wade.  Thomas and Karen lived in LeMars where he was employed at two different gas stations and packing plants.  They then moved to Mason City for a couple years with Thomas working for Coca-Cola.  In 1968, at the age of 25, he had the opportunity to start farming with the help of his father and father-in-law.  Thomas continued to farm through 2020 when he had to let his sons take over due to his health condition.  He had spent many years farming and it was truly one of the loves in his life.  Thomas and Karen did some traveling in the states, but something that brought him great joy were the tractor rides.  The last 15 years of his life were spent sitting on the seat of a ’47 Oliver 70, driving over 300 miles every summer.  He called them the “old man’s Ragbrai”.  On these rides he met and made many new friends.  Thomas was his grandkids number one fan.  He loved supporting them in their extracurricular activities and at various sporting events.  He also enjoyed taking the grandchildren on a variety of vacations to Branson, the Black Hills and Badlands, and fishing in South Dakota.

He was preceded in death by his parents, LuVerne and Myrtle Larson; sister and brother-in-law, Sharon and Gary Golbuff; nephew, Brad Golbuff; and an infant niece
To send flowers to the family in memory of Thomas L. Larson, please visit our flower store.