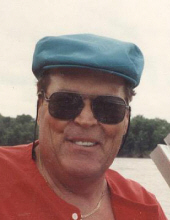 Funeral services will be held 10:30 A.M., Wednesday, January 3, 2018 at Our Saviors Lutheran Church in Leland with Rose Visser, lay minister officiating. Burial will be at Forest Home Cemetery in Leland with military rites by the Leland Veterans Ceremonial Unit.

Visitation will be held from 5 to 7 P.M., Tuesday at the Cataldo Schott Funeral Home in Forest City and will resume one hour prior to services at the church.

Memorials may be directed to Our Saviors Lutheran Church or Wounded Warriors.

Arnold Vance Ambroson, the son of Arnold and Jean (Evanson) Ambroson, was born March 13, 1941 in Forest City. He was baptized and confirmed at Our Saviors Lutheran Church in Leland and graduated from Forest City High School in 1958. After graduating, he attended cosmetology school. Pony served his country in the U.S. Army during Vietnam from 1964 to 1966 in the 5th Calvary Unit. Upon his honorable discharge, he returned to Leland and worked at the local elevator for ten years as assistant manager. On August 8, 1969 he married Judy Gast in Sioux Falls, SD. They lived in Leland where they farmed and raised their three children, Greg, Kyla Mae and Jason. Pony lived on the same block in Leland his whole life. He enjoyed his family and playing the role of Santa Claus during Christmas. He was instrumental in establishing the Leland VFW Post No. 6161 and was known for his generosity in helping others.

He was a member of Our Saviors Lutheran Church in Leland and the Leland VFW Post No. 6161.

He was preceded in death by his parents; and a sister, Karen Boyd.
To order memorial trees or send flowers to the family in memory of Vance "Pony" Ambroson, please visit our flower store.
Send a Sympathy Card