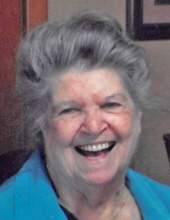 Vanna Arlene Nelson, the daughter of James Edward and Opal (Wymore) Meyer, was born November 3, 1932 in New Sharon, Iowa. On November 19,1949 she was married to Perry Franklin Nelson. In their early stages of marriage, they travelled extensively throughout the country in California, Kansas, and Iowa as Perry was a supervisor for a major aggregate processing corporation. In 1965 they eventually settled in Clear Lake, where they raised their three children. Vanna was employed at Oakwood Care Center as a nurse’s aide and later at Winnebago Industries. Upon retirement, they fulfilled their dream of living on their own acreage near Hanlontown, Iowa. Vanna enjoyed spending time with her many dogs and cats, working on her flowers and spending time with her children, grandchildren and great grandchildren who will all miss her dearly.

She was preceded in death by her parents, daughter Peggy, brothers, William Leaf, Kenneth Meyer and sisters, Joyce Dewitt and Anne Nelson.

Memorials may be sent to Cataldo Funeral Home at 760 Center Ave., Garner, IA 50438.
To send flowers to the family in memory of Vanna A. Nelson, please visit our flower store.