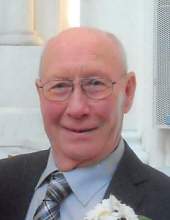 Visitation will be held one hour prior to services at the church on Friday. Cataldo Funeral Home of Woden is in charge of arrangements.

Vernon Leroy Hanna, the son of Sylvin and Olga (Skilbred) Hanna, was born January 17, 1930, on a farm in Winnebago County, Iowa. He attended the rural schools of Hancock County and graduated from Woden High School in 1947. On February 14, 1954, he married Sheryl Lee Goll at Zion United Church of Christ in Garner. They lived and farmed near Woden until their retirement. In 1997, Vern and Sheryl moved into Woden. He enjoyed coffee time at Wubben’s, visiting with old friends at the Woden elevator, working on bicycles and riding his bike.

He was preceded in death by his parents; daughter, Julie Rae Rowland; granddaughter, Stacy Ann Hemesath; brothers, Duane and Harlan Hanna; and a sister, Rosezella Havlik.
To send flowers to the family in memory of Vernon L. Hanna, please visit our flower store.