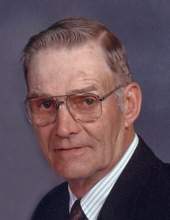 Funeral services will be held 10:30 A.M., Monday, July 25th at St. John’s Lutheran Church in Woden with Revs. Kim and Trudy Peterson officiating. Burial will be at Bingham Township Cemetery with military rites by the Britt Veterans Ceremonial Unit.

Visitation will be held from 4 to 6 P.M., Sunday at the Cataldo Funeral Chapel in Woden and will continue one hour prior to services at the church.

In lieu of flowers, memorials may be made to Hospice of the Heartland.

Vernon LeRoy Stohr, the son of Henry and Gertie (Bruns) Stohr, was born November 11, 1934 in Woden. He was baptized and confirmed at Immanuel Lutheran Church near Titonka. Vernon attended country school near his home and graduated from Woden High School in 1952. He served his country in the U.S. Army for two years in Germany. On December 5, 1965 he married Winifred Marie McNealy at Trinity Lutheran Church in Mason City. The couple made their home on a farm south of Woden and were blessed with three daughters, Vickie, Velda and Amy. Vernon was a lifelong farmer retiring in 2000 and then helping John Kurtzleben and Jim Crone when needed. He loved being with his grandchildren and working in his woodshop. Vernon also enjoyed the many vacations that Marie and he had with their travel trailer.

He was an active member of St. John’s Lutheran Church where he served as president of the church council and many other offices. He also served on the Woden Elevator Board and was a Bingham Township Trustee for twenty years.

He was preceded in death by his parents; and an infant sister.
To order memorial trees or send flowers to the family in memory of Vernon L. Stohr, please visit our flower store.