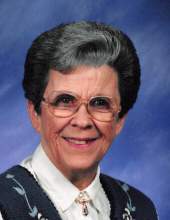 Virgie M. Grunwald, 90, of Garner, passed away peacefully at the Concord Care Center in Garner, Iowa, on Thursday, April 25, 2019.

Virgie was born on April 29, 1928 to Mathew and Mathilda (Wiener) Hardwig in St. Joseph, Minnesota, along with two brothers and four sisters. She graduated from Cathedral High School in St. Cloud, Minnesota in 1946 and continued her education at the University of St. Benedicts in St. Joseph, Minnesota. Virgie moved to Albert Lea, Minnesota where she was employed as a bank bookkeeper. While in Albert Lea, she met her husband, Dick Grunwald. Upon his release from the Army, they were married on September 6, 1952 and then they relocated to Mason City, Iowa where they welcomed their first child, Linda. In 1955, they moved to Clear Lake, Iowa, where their children Daniel and Nancy were born. The family later moved to Le Center, Minnesota, then continued on to St. Cloud, Minnesota for 19 years due to Dick’s career at the St. Cloud Technical College. They retired in 1987 to Pine River, Minnesota and returned to Iowa in 1995 settling in Garner, where they continued to live up to her death.

Throughout her life Virgie enjoyed most her children and grandchildren, followed by traveling with Dick, flower gardens and her love of birds and watching them at the feeders that surrounded their house. She enjoyed making her house a home for her family and friends.

Virgie is survived by her loving husband Dick of 66 years; son, Dan (Judy) Grunwald of Ventura and their sons, Connor and Ryan; daughter, Nancy (Tim) Tovar of Corvallis, Oregon and their children, Alex and Lauren; grandson, Michael DeOtis of Alexandria, Minnesota and his children McKallah and Ayden; a brother, Paul Hardwig of St. Joseph, Minnesota; a sister, Eileen Stibal of Owatonna, Minnesota; and countless nieces and nephews.

Virgie was preceded in death by her parents; brother, Jerry; sisters, Rosemund, Florence, and Auxilda; and most recently, Dick and Virgie’s oldest daughter, Linda.

Virgie will be sorely missed. Blessed be her memory.
To send flowers to the family in memory of Virginette "Virgie" M. Grunwald, please visit our flower store.