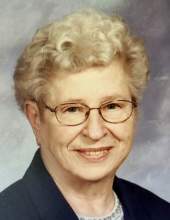 Virginia A. Vrieze, 83, of Britt passed away Thursday, November 5, 2020 at Westview Care Center in Britt.

A private family funeral service will be held 11:00 A.M., Monday, November 9, 2020 at the United Methodist Church in Britt with Rev. Robert Dodge officiating. Burial will be at Bingham Township Cemetery in Woden.

A public visitation will be held from 10:00 to 11:00 A.M., Monday, November 9, 2020 at the United Methodist Church in Britt. Masks are encouraged and social distancing guidelines will be followed.

In lieu of flowers, memorials may be given to the donor’s charity of choice. Cataldo Funeral Home in Britt is in charge of arrangements.

Virginia Ann Vrieze, the daughter of Elbert and Anna (Rieken) Green, was born June 6, 1937 in Algona. She attended Bingham No. 7 country school and graduated from Woden High School in 1955. She continued her education at Waldorf College in Forest City. After college, Virginia worked at Majon Motors in Britt. On December 29, 1956, she was married to Gerald Vrieze at the Evangelical Free Church in Britt. They lived and farmed near Woden all of their married life. After Gerald passed away in 1998, she continued to live on the farm southeast of Woden until moving into Britt in 2008. She enjoyed spending time with her family, crafts and tending to her flowers.

She was a member of the United Methodist Church in Britt and a former member of the Woden Christian Reformed Church where she taught Sunday and Bible school. Virginia belonged to a quilting group in Britt, sang in the Sweet Adeline’s Choir and, in her younger years, was active in 4-H.

She was preceded in death by her parents; husband, Gerald, Nov. 23, 1998; parents-in-law, Clarence and Anna Vrieze; brother-in-law, Kenny Vrieze; and aunts, uncles and cousins.
To order memorial trees or send flowers to the family in memory of Virginia A. Vrieze, please visit our flower store.