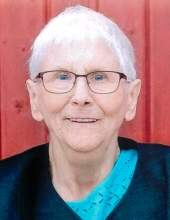 A gathering will be held one hour prior to the services at the funeral home on Thursday.

Family inurnment will be held in Madison Township Cemetery in Forest City.

In lieu of flowers, memorials may be directed in her name in care of her family.

Virginia M. Kamp, the daughter of Emmet and Margaret Earl, was born on October 27, 1942 in Austin, Minnesota. She lived in Austin until 1965. On November 27, 1965, she married Roger D. Kamp. The couple moved to Forest City, Iowa where she made a home and had 3 children, Susan Leuwerke (Steve Sprecher) of Scarville, Bruce Kamp (Deb Kamp) of Britt and Barbara Wolf (Scott Wolf) of Forest City.

Virginia had several part-time jobs including working as a private caregiver, seasonal work making caramel apples at House of Sweets, Forest Theatre, Harrisons variety store and in the kitchen at the Good Samaritan Center. She enjoyed spending time with family and friends, riding her bike, watching movies and playing bingo.

Virginia was preceded in death by her parents; her husband and two brothers, Don Earl of Austin, MN and Joe Earl of Owatonna, MN.
To order memorial trees or send flowers to the family in memory of Virginia M. Kamp, please visit our flower store.