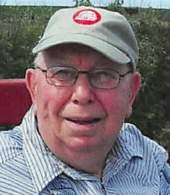 Funeral services will be held at 10:30 A.M., Saturday, December 28th at the First Lutheran Church in Britt with Pastor Lee Nelson officiating. Burial will be in Evergreen Cemetery with military rites by Britt Veterans Ceremonial Unit.

Visitation will be held from 5 to 7 P.M., Friday at the Cataldo Funeral Home in Britt and will continue one hour prior to services at the church.

Walbert Bruno Mayland, the second of twelve children of Fred and Etta (Bruns) Mayland, was born July 11, 1917 on a farm near Titonka. He was baptized and confirmed in the Lutheran Faith. He went to church and school near Titonka and worked as a hired man for area farmers. On December 18, 1941, he married Caroline Ella Meyer at Grant City, MO. Walbert served his country during WW II in the Army Air Force. Following his honorable discharge, he returned home and worked as a hired hand for Wiley Weaver for 18 years. Walbert and Caroline lived in the Klemme and Britt area until 1968 when they moved into Britt. In 1969, Walbert began working for Marting Manufacturing. After his retirement, he worked at the Eagles Grove Sales Barn and outside on his lawn and garden. Walbert enjoyed going to horse sales and spending time with his family.

He was a member of First Lutheran Church, Britt American Legion and was a former 4-H leader.