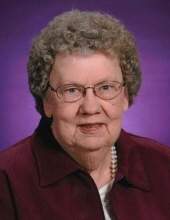 Funeral Services will be held 11:00 A.M. Monday, May 4, 2015 at Immanuel Lutheran Church in Forest City with Rev. Rod Hopp officiating.

Private family inurnment will be held in Madison Township Cemetery at a later date.

Memorials may be directed to the Down Syndrome Association of North Central Iowa (DSA of NCI) or Opportunity Village Children’s Autism Center.

She was born on August 4, 1928 on a farm near Crystal Lake to Clara (Olson) and Roy Hanson. She graduated from Hayfield High School in 1946 and married Dell Book at Immanuel Lutheran Church in Forest City on March 17, 1948. When Dell died in 2008, they had been married 60 years. To this day, she missed him dearly. They had three children, Mike, Kathy, and Ron. They both worked hard to insure that all three had college educations and were successful in life. Wanda was no stranger to hard work. She coddled eggs at Sahr Produce and was a matron at Waldorf College. Her most rewarding career was assisting the Ron and Linda Haugen family for 27 years.

Wanda was a well-known cook and baker. She was passionate about baking and no one could bake better cinnamon rolls, buns, or bread than she. She once had her sidewalk repaired. When asked how much she owed, the contractor asked only for two dozen of her cinnamon rolls. Even in failing health, she would say, “If I could just bake something, I know I would feel better.”

Wanda was Mom to three children, Grandma to seven grandchildren, and Grandma Wanda to sixteen great-grandchildren. She loved them dearly and enjoyed their visits. The grandkids and great grandkids enjoyed her candy drawer that was always filled to the brim with suckers, candy bars, and all things sugary. Between visits she would spend countless hours looking at their pictures, bringing both smiles and tears to her face. She was most happy with one, two, or three little ones sitting on her lap. There were hugs all around.

She was preceded in death by her husband, Dell; her parents, Clara and Roy Hanson; her brothers, Kenneth Hanson and Wallace Hanson; her sisters, Dorothy Gettis, Marge Gustafson, Arlys Christensen, and Karen Leibrand.

Wanda’s family wants to give special thanks to Ron, Linda, Jenny, and Julie Haugen for making her part of their family all those years, Bonnye and Ade Reineke for being such good neighbors at the condo, and Sandy Lindflott for her all her love and the many calls, visits, and picture quilt. She thought highly of each of you.
To order memorial trees or send flowers to the family in memory of Wanda Book, please visit our flower store.