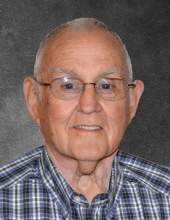 Memorial services will be held 11 A.M., Saturday, November 15, 2014, at the United Methodist Church in Forest City with Rev. Charles Layton officiating. Private family inurnment will be held at Rose Hill Cemetery in Eagle Grove at a later date.

A gathering of family and friends will be held one hour prior to the service at the church.

Wayland was born on February 21, 1933, in Eagle Grove, Iowa, the son of Bruce and Bessie (Roberts) Blake. He graduated from Eagle Grove High School in 1951 and later from Mankato State College. He married Dolores Lewis on June 14, 1959, at Asbury United Methodist Church in Webster City, Iowa. To this union three daughters were born: Shelly, Maria and Alyssa. After working as a territory manager and merchandiser for Skelly and Sun Oil companies, he established Forest City Firestone in 1969 and worked as owner-manager for many years. Later in his career, he drove motor homes and semi-trailers for Winnebago Industries before retiring in 1995.

Wayland was an Iowa high school wrestling champion in 1951 and went on to compete at Iowa State University. He enlisted in the U.S. Army in 1953, serving in Germany for most of his duty. Upon discharge, he attended Mankato State College and joined the wrestling team competing in the NCAA championship in Maryland. He continued to enjoy watching sports of all kinds his entire life, especially following the Iowa Hawkeyes. Horses were always a big part of Wayland’s life, and he was a lifetime member of the American Quarter Horse Association. He served as a member of the Forest City City Council, and was a volunteer in the Forest City Fire Department. Wayland was a member of the Forest City United Methodist Church.

Wayland was preceded in death by his parents.

Memorial contributions may be made to the Forest City United Methodist Church or Forest City Area Emergency Services.
To order memorial trees or send flowers to the family in memory of Wayland R. Blake, please visit our flower store.