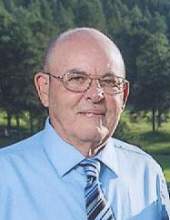 A memorial service will be held 10:30 A.M., Monday, February 12th at the United Methodist Church in Garner with Rev. Paul Evans officiating. Military rites will be conducted by the Garner Veterans Ceremonial Unit. The family invites everyone to join them for a time of food and fellowship in the church fellowship hall immediately following the memorial service. Inurnment will be at 1 P.M., Monday at Ell Township Cemetery in Klemme.

A gathering of family and friends will be held from 3 to 6 P.M., Sunday at the Cataldo Funeral Chapel in Garner.

William Edward Haan, the son of Edward and Myrtle (Schreiber) Haan, was born November 30, 1939, in Britt. He graduated from Garner High School in 1958 and continued his education at the University of Iowa. Bill served his country during Vietnam in the U.S. Army. Following his honorable discharge, he returned to Garner where he farmed and worked at the Farmer’s Coop Society. He also was employed at CF Industries in Garner and Winnebago Industries where he retired from in 2005. On February 14, 1995, he married Patricia Hammitt at the United Methodist Church in Garner. They made their home in Garner before moving to Klemme. Bill loved his children and grandchildren. He enjoyed attending school athletic events, watching birds and squirrels, fishing and gardening.

He was a member of the Garner United Methodist Church.

He was preceded in death by his parents; grandson, David Michael Feist; brothers, John and Jim Haan; and brothers-in-law, Jim Klunder and Ralph Thomas.
To order memorial trees or send flowers to the family in memory of William "Bill" E. Haan, please visit our flower store.