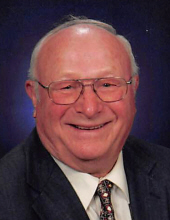 Funeral services will be held 10:30 A.M., Thursday, September 22nd at St. Wenceslaus Catholic Church in Duncan with Fr. Jim Dubert officiating. Burial will be at St. John’s Catholic Cemetery in Duncan with military rites by the Britt Veterans Ceremonial Unit.

Visitation will be held from 4 to 7 P.M., Wednesday at Cataldo Funeral Home in Britt with a Scriptural wake service at 4 P.M. and a Catholic Workman rosary at 4:15 P.M. Visitation will resume one hour prior to services at the church.

William Joseph Malek, the son of William G. and Lillian (Vavrik) Malek, was born April 10, 1932 in Mason City, Iowa. He attended Hayfield Community School from 1937 to 1939, Garfield No. 9 country school for six years and graduated from Britt High School in 1949. Bill served his country in the U.S. Army from March of 1953 to February of 1955 in the Engineering Corps operating heavy equipment. On February 14, 1956 he married Celestine “Sally” Buzicky at St. Wenceslaus Catholic Church in Duncan. They lived north of Britt where they farmed and raised their family. Besides farming, Bill also was a postal carrier for eighteen years. He enjoyed his family, fishing, gardening, mushroom hunting and music. Bill was proud of his Czech heritage and enjoyed being part of the Malek Fishermen Band, playing concertina for many years.

He was a member of St. Wenceslaus Catholic Church, Catholic Workman FCSLA branch W51 and the Britt VFW and American Legion where he served as past commander.

He was preceded in death by his parents; wife, Sally in 2002; two infant sons, Paul and Carl; and a daughter Ramona.

The family intends to distribute any memorials among the Britt charitable community.
To order memorial trees or send flowers to the family in memory of William "Bill" J. Malek, please visit our flower store.
Send a Sympathy Card