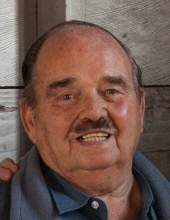 Memorial services will be held 10 A.M., Saturday, November 18th at Faith Lutheran Church in Miller with Rose Visser, lay minister officiating. A flag presentation ceremony will be conducted by the Garner Veterans Ceremonial Unit. A luncheon will follow with inurnment at Ellington Township Cemetery northeast of Miller.

In lieu of flowers, memorials may be directed in his name to Hospice of North Iowa.

Bill Short, the son of Gilbert and Alice (House) Short, was born in Webster City.  Bill (nicknamed ‘Wild Bill’ by his classmates) graduated from Webster City High School in 1952.  According to his sister Pat, as soon as Bill got his driver’s license, he was told that he had to drive his younger sisters to school.  He was so mad that he dropped them off a block away from school every morning.  Fred House was, by far, his favorite uncle.  After graduating, Bill served in the Air Force during the Korean War and was stationed in Japan. Bill married his first wife, Shirley Garrod, in 1952.  They had two sons, Ron and Steve, and divorced in 1959.

Bill and his two sons moved to St. Paul, MN where he worked for the FAA as an air traffic controller and met Rosemarie (Ro) Luedtke, who was raising her son, Mark, from her first marriage.  Bill transferred to the Mason City Airport to work in the flight service station and married Ro in Clear Lake, Iowa and adopted Mark.  While living in Clear Lake, Bill, Jeff, Daniel and Chris were born.

Bill was always an entrepreneur.  In addition to his full time work, he ran several businesses, including an extensive vending machine business selling candy, small toys and sodas as well as packaged sandwiches and salads that Ro prepared at home.  The older boys helped Ro prepare foods in the basement, stocked the warehouse of vending machine products, and accompanied their Dad servicing vending machines.  Bill also started ‘Short’s Fire Equipment Company’, selling Kidde products and installing fire prevention systems in restaurants and other commercial establishments with his boys helping cut and assemble pipe and send out invoices.  Bill fostered an entrepreneurial spirit in his boys. They pooled their savings and created (with their Dad’s guidance) their own vending machine business ‘Short Brothers’ Popcorn Company’ with Ron, Steve and Mark probably being the youngest corporate officers in the state.

In 1969 Bill and Ro moved to an 80 acre farm near Miller Iowa.  They also stopped trying to have a girl of their own and adopted Cindy from Korea.  During that process, they discovered that older boys were harder to place, and they adopted Joe (as a 5 year old) in 1976.

Originally the Short farm was a typical family operation with corn and soybeans as cash crops, a very large vegetable garden and fruit trees for feeding the family, and pigs, chickens, dairy and beef cows and other animals for family food or sold for income.  Each of the children had chores and responsibilities, but also owned livestock of their own to generate money for spending or savings.

In 1975, Bill and Ro sponsored a family of 5 Hmong refugees to live in the mobile home already on the farm.  Within a little more than a year they became independent and moved into their own home.  Bill continued to sponsor more of their extended family to join them from Thai refugee camps.  Over 20 Hmong refuges have become successful US citizens because of Bill’s sponsorship.

Tragedy hit in 1976 when Ro died in a farm accident.  Ron, Steve and Mark had all left home by then but Bill was faced with raising 6 children while still working full time and running the farm.  Dorothy (Ott) Robbins was a recent widow who had successfully raised four children (Doug, Rosie, Sherrie and Kandi) who were already living on their own.  Gail Reese introduced the two of them in a blind date, and, to say Dorothy was a blessing to Bill and the children was an understatement.  Soon after Bill and Dorothy began dating, Dorothy recalls Daniel and Chris running to greet her “we’re so glad you’re here!”  She could relate to the children because she had lost her own mother when she was only 5 years old.  They married in 1978, and Dorothy helped successfully raise another 5 boys and a girl.

On the farm, Bill and Dorothy decided to rent out a large portion of the cropland and developed the balance into orchards, small fruit and asparagus beds to create ‘Short’s Pik Acres’.  They also had a successful Watkins Products business.

Bill retired from the Federal Aviation Administration in 1987 and, after Cindy (the youngest) had left home, they moved to Cabool MO, and spent winters in Yuma AZ.  They enjoyed the RV lifestyle and were introduced to casinos over the winters.  Bill continued working as a greeter at Walmart and on a volunteer security staff.  After ten years they returned to Garner to be nearer to grandchildren.  Bill continued to work at various retail jobs and also was a mentor for GHV Schools for One-On-One Mentoring.  Bill and Dorothy enjoyed visiting casinos and watching their large family continue to grow.

Towards the end of his life, Bill struggled with worsening health issues.  He died peacefully under hospice care with family at his side.  He will live on in our memories and in the impact he made in our lives.