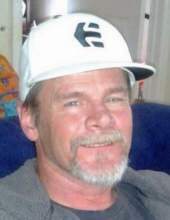 GARNER – William J. Puffer, 55, of Garner, formerly of Britt, died Thursday, May 21, 2015 at the University of Minnesota Medical Center, Fairview in Minneapolis, MN.

Graveside services will be held 10 A.M., Tuesday, May 26th at the Corwith Cemetery. His body was cremated. There will be no visitation. Cataldo Funeral Home in Garner is in charge of arrangements.

William Joseph Puffer, the son of William and Esther Joann (Asche) Puffer, was born September 29, 1959 in Britt. He attended school in Britt where he graduated from high school in 1979. On February 27, 1984 he married Donna Smith. They lived in Oklahoma until 1997 when they moved to Colorado. In 2014, William returned to Iowa and made his home in Garner. He worked at Winnebago Industries in Forest City.

He was preceded in death by his father; and a sister, Rita Seely.
To send flowers to the family in memory of William J. Puffer, please visit our flower store.