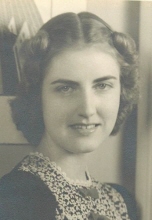 Funeral services will be held at 11:00 AM Saturday, November 16, 2013 at Immanuel Lutheran Church in Forest City with Pastor Greg Anderson officiating. Burial will be in Oakland Cemetery in Forest City. Visitation will be held an hour prior to the service at the church.

Wilma was born June 16, 1918 in Forest City, Iowa, the daughter of John E. and Minnie Holm Solyst, and graduated from Forest City High School and Waldorf College. She taught in the Scarville and Le Claire public schools, worked at the Federal Reserve in Minneapolis, and the Pentagon in Washington, D.C. She retired after fifteen years as Deputy Clerk of Court of Winnebago County.

Wilma always lived within the circles of her family. The youngest of six children, she maintained very close relationships with her siblings throughout her life. Only one survives her, the youngest of her brothers, Ephraim.

In 1945 she met and married George S. Belsheim; they farmed near Leland until his death in 2000. They have three children, Howard (Beverly), Allen (Karin) and Joy, and four grandchildren, Brit, Kari, David (Enessa) and Holm.

Wilma had a lifelong relationship with Immanuel Lutheran Church in Forest City, Iowa. There she was baptized, confirmed and married. She taught Sunday School and Vacation Bible School, directed the Junior Choir, and played the piano and occasionally the organ for services. She was active in the circles and WECA.

Wilma loved music, particularly piano and choral music, particularly hymns. She taught piano for many years, accompanied other performers in college and later, and when retired, played organ for the Forest City Methodist Church and Forest Evangelical Church. Her family understood that they must sing when she played 'Silent Night', Christmas season or not. She played beautifully.

To order memorial trees or send flowers to the family in memory of Wilma M. Belsheim, please visit our flower store.
Send a Sympathy Card