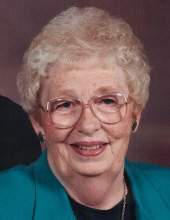 Visitation will be held one hour prior to the services at the church on Friday.

In lieu of flowers, memorials may be directed to Immanuel Lutheran Church.

Winnie was born March 7, 1930 in Minneapolis, MN, the daughter of Wilma Butler. She was adopted by Edwin and Clara Munson, of rural Forest City when she was three years old. She attended and graduated from Forest City High School in 1948. She was married to Jerold Robert Holland on August 26, 1949 and to this union three sons were born, John, Tom and Dean. They celebrated their 70th wedding anniversary in August of 2019.

Winnie was an excellent housewife and farm helper. She was known for her baking, sewing and her love of gardening. She enjoyed sewing clothes for her grandchildren. They had a large garden on the farm and Winnie used to can or freeze what she raised. There was always plenty of pears, peaches, bing cherries, apricots, tomato sauce, soup and meat that she had canned. Family was very important to her and she enjoyed spending time with them, especially her grandchildren. She will be dearly missed by all who knew and loved her.